Rocketing across the solar system at record-breaking speeds is the Titanic Express, the fastest luxury Space Train ever created by humankind. You and your crew have set your sights on this, its maiden voyage, as the perfect time for the heist of the millennium. Gather your crew, figure out your target, and hold on to your butts as you dive face-first into SPACE TRAIN SPACE HEIST.

A high-octane, single session, GM-less, Forged In The Dark, goof of a game for 3-5 players about space robbing a space train.

Space Train Space Heist was designed with the goal of creating a game based on Blades in the Dark that can be quickly learned and played in a single session by people who have never played a Forged in the Dark game before and may be newer to RPGs at large. In other words, it's FITD as I want to run it at cons.

Play as a Hooligan, Egghead, Space Wizard, or Space Cowboy (among others).  Enter a battle of the bands with iconic pop star Voxel Moonglitter. Try and out race Slick Fastwheel, runner up at last year's Indy 5000. Party with The Raven Man, legendary DJ. Do any of these on your way to stealing Nighthawks 2: Red-Tail Rising or the last living Zozo bird.

In order to download this game you must purchase it at or above the minimum price of $5 USD. You will get access to the following files:

Support this game at or above a special price point to receive something exclusive.

If you're in need for any reason and would like a copy of the game, please download a copy for free.

Alternatively, if you want to donate $5 to Planned Parenthood, Black Lives Matter, a local bail bond, or a similar organization in your country instead of paying me directly for the game, do that and then download one of these.

this game is an absolute joy. our usual game got canceled and we picked this up on a whim and i'm so glad we did. the options are all so evocative and make for brilliant prompts, and in general the writing on this game is just an unfettered delight all the way through. the mechanics are easy to pick up and follow and the whole game makes for some brilliantly done pick-up-and-play!! thank you for sharing this!!!

We played this on our oneshot night a couple of weeks ago, and I found it to be hilarious and entertaining.  It contained just the right mix of fun prompts and open-ended play.

Additionally, it's one of those rare beasts that we could actually finish in a single evening.

This game was part of a bundle I received and we played it when our GM couldn't make it to the regular session the other day.

As a group (3 players at the time) we tend to be more on the silly side with our regular games as well and Space Train Space Heist turned that up another notch. We're also experienced Microscope (Ben Robbins,  Lame Mage) - players, meaning we were already comfortable with extremely rules-light improv games. If that doesn't sound like something you enjoy, you might want to stay away from this game - the rules are bare minimum, which isn't a bad thing if you can handle it but it's not for everybody - everyone else should absolutely go check it out!

I played this as a oneshot game when we didn't have all of our players, and holy cow, I need to play this again

we rolled and figured out that the object of our heist was the train, rolled individually for our reasons to heist and ended up coming up with a group reason, and then rolled to see who had the train, which just so happened to be Zelda Buckwild the zookeeper and TV personality

we *then* decided that, since we are all fans of the youtube channel Drawfee and their dnd-esque drawing show Drawtectives, that this train was of course a Wild Train from that setting. so instead of us trying to steal the train to have a train, we were stealing it to set it free in the wild.

the space wizard was in love with the train, i (the hooligan) was paralyzingly afraid of water (which was fun when we got to the train car that was a fully functioning water park), the gadgeteer woke up some angry ai, we got some train love trivia from the egghead,,,,,,,,,it was insane, and i cant wait to play again

i think whenever we have a oneshot this might end up being our go to, especially once everyone learns how to play, we can just pick a class we havent played before, create the characters and the heist, and then start going

These are such kind words, and I'm so glad you had a blast with it! Thanks for the session report!

If I wanted to introduce someone to Forged in the Dark games, this is a really strong contender. Easy, fast, light and a hell of a lot of fun. Not to mention beautifully laid out and extremely readable! Highly recommended! 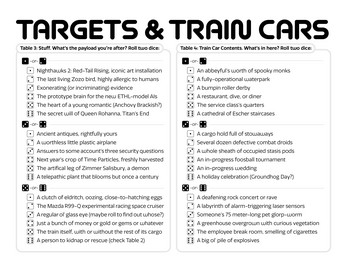 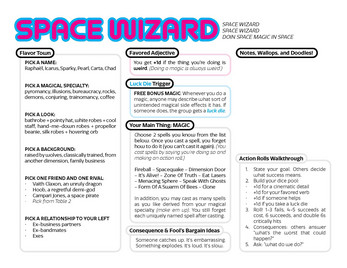